Fort Myers had been abandoned after the Seminole Indian Wars and was reoccupied by Union soldiers in December 1863. It was the only federally occupied fort in South Florida. Union commanders planned to send horse soldiers into the area north of the Caloosahatchee River to confiscate livestock from area cattle ranches, thereby preventing shipment of beef to the Confederate Army of Tennessee in Georgia. By 1865, it was estimated that more than 4,000 head of cattle had been taken from cattle farms by the Union cavalry units from similar raids.

Fort Myers was used as a refugee center for escaped slaves and also for Union sympathizers who were being persecuted by the secessionists, who were burning their homes and driving them off their farms. At one period during the Federal reoccupation, more than 400 people crowded into the fort's grounds. The fort was garrisoned primarily by the 2nd Florida Cavalry (made up mostly of refugees who had enlisted), a recently detached company of the 110th New York Volunteer Infantry and a company from the 2nd United States Colored Infantry, both from Fort Zachary Taylor in Key West.

The Confederates organized a special battalion of the state militia with the sole purpose of stopping the Union raids. The battalion, commanded by Col. C. J. Munnerlyn, was made up of cattle drovers who were exempt from the Confederate Army. Among them was Capt. Francis A. Hendry. They became known as the Cattle Guard Battalion or "Cow Cavalry."

In early February 1865, the Cattle Guard Battalion was deployed at Fort Meade. They were ordered to attack Fort Myers because it was learned that the fort might soon be abandoned. Three companies and one artillery piece arrived at old Fort Thomson (LaBelle, Florida) on February 19. They marched down the river and camped near Billy's Creek. The next morning, they surprised several black Union soldiers on picket duty and shot them as they tried to flee.

The firing had alerted the fort, so the Confederates fired a warning shot from their cannon, followed by a messenger demanding the Union troops surrender. The fort's commanding officer, Capt. James Doyle, sent back a refusal:

"Your demand for an unconditional surrender has been received. I respectfully decline; I have force enough to maintain my position and will fight you to the last."

Doyle wheeled his own two cannons outside the fort. A battle began with the black Union soldiers firing the artillery and the white Union cavalrymen firing their carbines. Throughout the day, both sides continued sporadic firing, which finally ceased at dark. One black Federal soldier had been killed in the skirmishing.

The next morning, the Cattle Guard Battalion returned to Fort Meade. Even though the attack had been repelled, Fort Myers was abandoned by its garrison in early March. 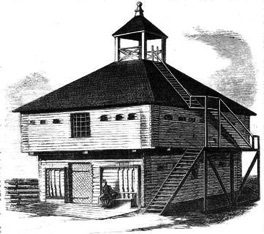